I'd rather see him than The Gingerbread Man any day.

Occasionally, from my fourth-floor, street-facing apartment, I can hear the drones of a Buddhist chant echoing down the street. However, it doesn't come from a temple nor from the monks' periodic charity marches through the city. It's also quite loud, as it's pushed through a speakerphone mounted on a truck, like many of the advertising vans and election boats. I can even understand the message, and it's not something I think a typical Buddhist monk would bother to chant...

"Sweet Potato! Delicious!" it translates, and it doesn't lie.

The chanting truck is our local version of the ice cream van from when we were little. Adults and children both will race out to catch the truck as it passes to purchase roasted halves of large sweet potatoes. I should note, sweet potatoes in Japan are literally sweet, not simply relatively so compared to other potatoes.

I've heard the The Sweet Potato Man pass by our apartment several times this year. Usually he's gone by the time I race down the three flights of stairs. One time I had only just missed him, as he was turning the corner down the opposite street. My husband did reach him one time and bought several for us, but I myself had not been lucky enough to catch him...

Dean and I don't have a car and can easily utilize the public transportation for most of our needs, so our only experience with the gas station has been a walk to retrieve more kerosene for the winter heater.

I had the pleasure of stopping by a gas station in the car of one of my students, and we pulled up to the full service pump. "Is this normal?" I asked. "It's very unusual in America." Of course, we used to have full service stations, and if you look hard enough in big cities, you can find one or two, but generally, the drivers of the U.S. rush through self-serve stations and automatic car washes for their immediate vehicular needs.

The gentleman at the pump (who didn't have a spot of grease on him that I could tell) quickly set off to fill the tank. He came back with a clean, wet rag for us to use on the dash and our side of the windows while he washed the outside facing panes with soap and water. The experience was over in about two minutes, and the car seemed fresher without our having to get out.
Posted by Rachel 久允 at 5:08 PM No comments:

*This product has been tested safe for humans.

I suffer no shortage of my more musically inclined friends in the west telling me the good, the bad, and the ugly of pop music back home. The music industry documentary exposé, Before the Music Dies covers much of their concerns, particularly the homogenization of music and the lowering quality of the pop idol du jour. As a humanist and a student of psychology, my interest always falls with the idol herself (or himself, though rarer). What is she experiencing? How is she handling the media? Will she be okay when the praise is gone and only the worst of the paparazzi are left, looking for embarrassing poses or the exposure of cellulite-ridden skin? When value comes from hype, beauty is fleeting, and true talent is replaced or hidden behind technology, dehumanization is bound to occur. The train wrecks that follow suit our culture's mythos as well as our own secret sadistic schadenfreude.

Music is a business. There is money to be made. Somebody has to take the limelight (if not also the fall), and aging performers must be replaced, lest profits slip. Right?

Enter Japan's entirely fictional pop idol, Miku Hatsune. She's sixteen with aqua colored hair that's longer than her own body, has a broad vocal range of A3 to E5, can sing impossibly fast, never tires, and never ages. She's performed concerts with live bands whom she could introduce by name. What's more, for the price of software, she will dance and sing just for you, in poses you command and lyrics you write (assuming you can type Japanese).


Hatsune's voice is propelled by Vocaloid (Wiki article), a software program that imitates the human voice, allowing any aspiring songwriter or lyricist to create full songs and to upload and share new work with others.

There's some speculation that the "live" versions of Hatsune in concert were created using mirror techniques like Pepper's Ghost or the slightly elaborated Musion Eyeliner. Though I can't find it now, one article claimed she was made using nine projectors and special software (beyond the Vocaloid software that runs her voice). Watching Youtube videos of her concerts, I think it's more likely she is made with a DILAD Screen or similar product, as claimed in the Wikipedia article about holograms.


Though Hatsune has not given a concert in several years, she has continued to make two to four albums a year, and her voice is improving. Miku Append is an additional software pack you can add to Vocaloid to change the timbre of her voice from breathy "Sweet" to a more melancholy "Dark." Hatsune is also learning English, though like most English imitation programs, diphthongs are awkward and vowels and stressing are inconsistent with any one regional accent.

Because almost anyone can buy her software, write songs, and share them on the internet, Hatsune has a wide range of musical styles, from folk, to pop, to jazz, to grunge. With Vocaloid, she's not alone, as she's accompanied by a set of other voice-centric personas that have different ranges and styles.

Though she was designed to be a singer first, Hatsune's image has become one of the most well-known in Japan, and she has had appearances in anime, manga, and games (physical and virtual); and there has been numerous figurines made of her. Various incarnations of the virtual pop idol include a chibi (super-deformed; small and cute) version for video games (pictured below): 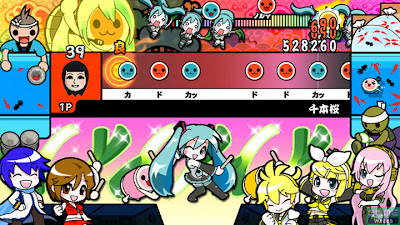 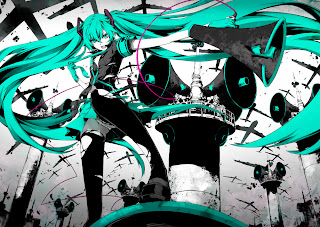 Commercial art for "Love is War"

"Love is War" video with Japanese and English subtitles

. . . to a mature-looking figurine with a commanding gaze, celebrating her car's win at Japan's Super GT in 2011: 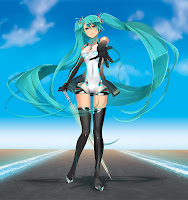 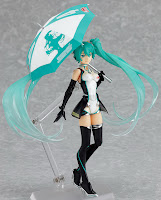 
With still a long way to go before we can fully synthesize the human voice to sound natural, Hatsune poses no threat to "real" singers, though she does add a new perspective. Digital manipulations like autotune become just another toy in Hatsune's box rather than the shameful crutch of failing human voices. Would-be songwriters and lyricists have a way to explore and exhibit their work without having to "break into" the status-quo-enforcing industry first. Hatsune herself can be loved by adoring fans, and when she becomes unpopular, safely let go without feeling any pain or rejection. And though there are still many kinks to be worked out in terms of copyright, Hatsune Miku and her fellow Vocaloids are showing us a little of the future of the music entertainment industry. It's no wonder that her name means "First Sound, Future."